The Toronto Raptors Are Champions in Two Ways

The Toronto Raptors won the NBA championships for the first time in their history after defeating the Western Conference Golden State Warriors. From recruiting the right players to training hard, the Toronto Raptors have made great strides since their debut in 1996. Of course, winning a championship game is a huge success, but so is the evolution of their branding as a team. The team evolved from the initial “Barney the Dinosaur” logo and color scheme to a more sleek, refined, and successful design. So where exactly did the Toronto Raptors’ logo begin? Let’s dive in.

Is it a surprise that the 90’s-formed team drew some inspiration from the recent blockbuster movie, Jurassic Park? While the movie was gaining popularity, the team used this momentum to design their branding and logos. In theory, this was a great marketing strategy in an era where NBA merchandise was readily available to the fans for the first time in history. However, the design didn’t receive the same level of enthusiasm from critics. The original logo featured a red raptor dribbling a silver basketball while wearing a basketball uniform with a distinct “R” on the chest. This image was placed over-top a purple circle with the team name, Toronto Raptors, across the top.

While attempting to be as ferocious as the velociraptors of Jurassic Park, it was more commonly compared to a different dinosaur in pop culture – one Barney the Dinosaur. According to 99% Invisible, one critic even described the logo and jerseys as “cartoonish and ridiculous”.

The Toronto Raptors kept up with this design until around 2009, when they adjusted the color scheme to tone down the purple, but kept most of the original 1996 design.

However, the removal of purple didn’t help with critic’s reviews of the logo design. Sports Illustrated wrote in their 2015 list of the ugliest basketball jerseys of all time that “the Toronto Raptors cartoon dinosaur logo is one of the worst in all of sports. Thankfully, [it] will soon be extinct” (99% Invisible). Of course, Sports Illustrated was forecasting the new design to emerge in 2015 that would rid the team of the cartoon raptor.

The new Toronto Raptors logo removed the raptor altogether, creating a more sleek design without any cartoonish notes. With the removal of the color purple and the cartoon velociraptor, the team erased any resemblance to the friendly purple dinosaur so popular among kids under 10. The new logo features a silver basketball with a raptor’s slash across it, all surrounded by the text “Toronto Raptors”.

Despite the “Barney the Dinosaur” design disappearing from the team’s current branding, the original design lives on in retro jersey design sales and the team’s history, especially now that they’ve truly made their mark in the NBA. 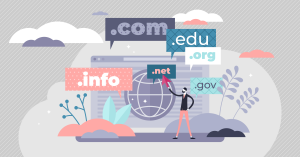 Should I Buy My Own Domain? How to purchase your own domain name.   Hey sports fans! So I frequently get asked

Know Your Business Why

This is step 5 in the 10 Steps to Developing a Brand series. It’s important to know your “why” statement when developing

A print shop based in the Washington D.C. area had an outdated website that desperately needed a new look. There was also